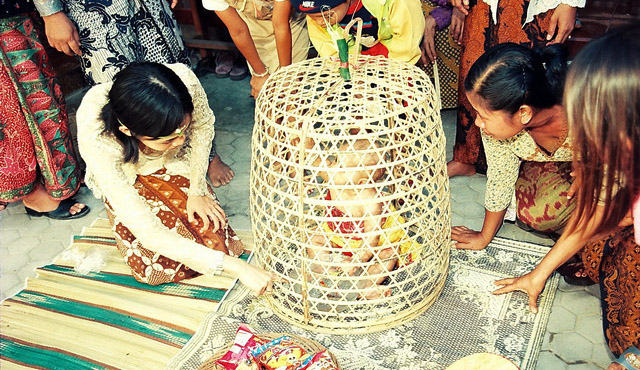 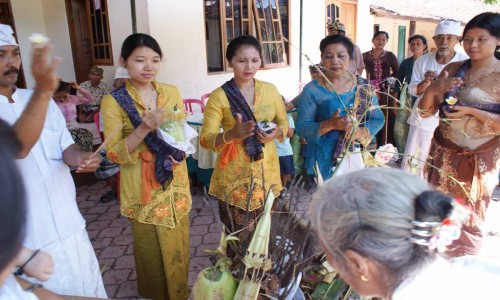 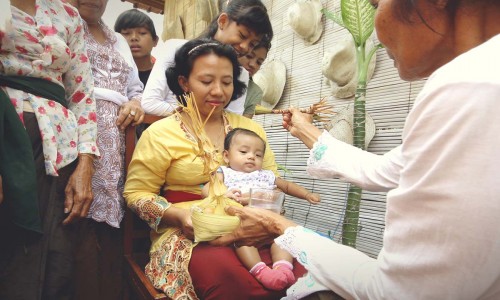 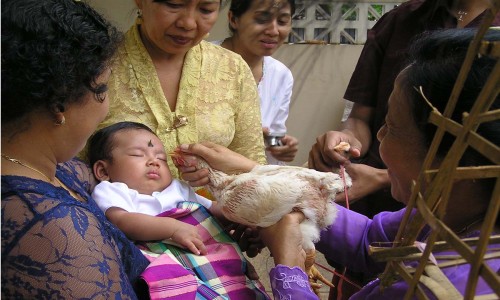 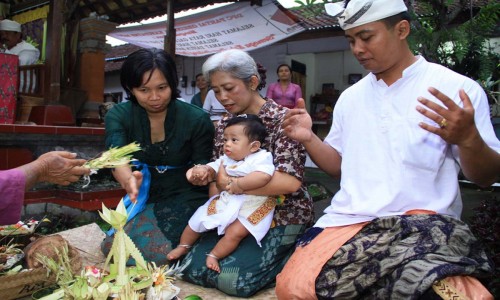 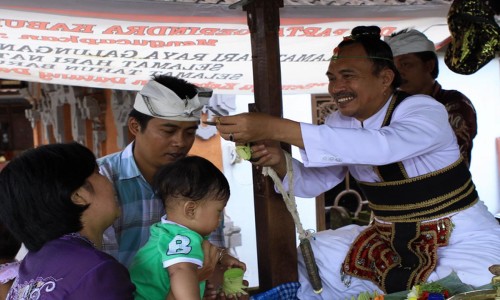 Even before a baby is born, several rituals are observed in order to prepare for the birth followed by a series of important ceremonies lasting for three months when the baby is finally able to touch the ground in its first contact with mother earth (prior to which time the baby has maintained unsullied contact with the spirit world).  And prior to it’s 42nd day on the planet, the baby is believed to be an infant god who embodies the soul of a reincarnated ancestor.

As is custom during the pregnancy, the mother-to-be is considered unclean and not allowed the temple area while the husband grows his hair out during this period.  At the third or fourth month marker according to the Balinese calendar, the first cleansing ritual takes place followed by the second ceremony four months latercalled Gedong-gedongan in which blessings for an easy and safe birth are requested. When the baby is born a ceremony called Penyambutanwelcomes it into the world and the placenta, which the mother is not allowed to touch, is soon after birth buried in either the left or right side of the family’s northernmost temple pavilion, depending on the baby’s sex.  During the first three days the parents are also not allowed to enter the kitchen and then on the seventh day a rite called Kepus Pungsedis performed to mark the falling off of the umbilical cord which is placed in a shrine to Kumara, the guardian of babies in another ceremony held twelve days after birth called Rorasin.  Next, a very large ceremony called Mecolongan is held on the baby’s 42nd day on earth that ensures the child’s development continues smoothly and is also the time a name is bestowed and then on the 3rd month another important rite called Nyabutan takes place in which the baby is allowed to touch the ground.  210 days (six months) after birth their ‘birthday’ or Otonan is marked and celebrated every six months.  After three Otonans, the child’s hair is shaved to represent purity. The final rite of passage as a youth is called Menek kelihthat is determined once the child reaches puberty.